With the arrival of heat, the body asks for light and refreshing foods such as fruit, vegetables, ice cream … dishes that, in short, help to resist high temperatures. Summer is the season of the year when it is easier to eat healthy, but you must never lose sight of the quality, the good preparations and, of course, the flavor. Characteristics common to the dishes recommended below and which can be enjoyed in various restaurants in Albacete, Burgos and Madrid.

The Ababol restaurant (Calderón de la Barca, 14. Albacete) has become, in just a few months, the great revelation of La Mancha cuisine. Located in the center of Albacete, the welcoming restaurant is already a reference point for those who want to savor the haute cuisine of the earth. The proposal of its chef, Juan Monteagudo, focuses on the traditional Manchego cookbook with particular emphasis on the seasonal product, to which he applies various techniques of French cuisine.

On the menu, dishes such as Manchego Asadillo with tomato ice cream and smoked sardine stand out, a perfect proposal for the summer. The basis is the traditional barbecue recipe, with roasted peppers, onion and garlic, but to which it applies innovative elaborations. With pepper he makes a tartare and with tomato a refreshing sorbet to which he adds a touch of vodka. The dish is completed with cumin tomato water, pickled onion with Modena vinegar, smoked sardine and fresh sprouts. A real treat. 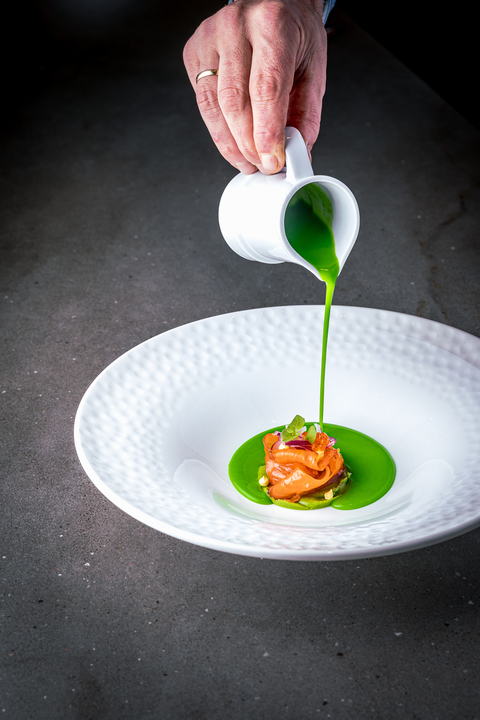 The city of Burgos has long been at the center of gastronomic attention thanks to proposals such as those of the restless chef Miguel Cobo. Having been successful with Cobo Vintage, with which he earned a Michelin star, the chef has embarked on a much more ambitious project which he calls Cobo Estratos (Plaza de la Libertad, 9. Burgos). It is a space of 1,500 square meters located in the center of the city that was inaugurated two years ago with Cobo Tradición and which will culminate on 1 July with the opening of Cobo Evolución, a restaurant that reflects the history of human evolution.

In Cobo Tradition it offers a cuisine based on product, stew and seafood. Dishes with very marked influences of their land, Burgos and Cantabria, and with refreshing and summery proposals such as marinated salmon with ceviche emulsion, avocado and apple soup. A fresh dish that successfully combines different flavors and textures and reflects the essence of the restaurant, traditional cuisine with avant-garde touches. On the menu there are other recipes ideal for the hot season, such as Ajoblanco with smoked almond, tomato, plum and scallop tartare or Salmorejo, buffalo burrata with salmon tartare and pickled cherries. 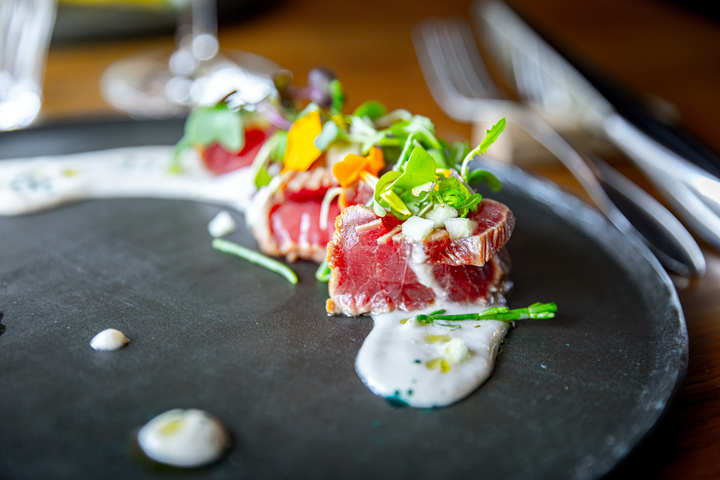 For the hottest days in Madrid, the brothers Sergio and Roberto Hernández, owners of Latasia (Paseo de la Castellana, 115. Madrid), propose one of their most loved dishes.

The new menu focuses on a more refreshing offer with proposals such as the Ajoblanco pear. It is one of the best known cold soups – made with breadcrumbs, garlic, olive oil, salt, water and almonds – to which Japanese mayonnaise and pear are added. With the rice vinegar in the mayonnaise you get a softer dish, while the fruit gives it a sweet touch and a creamy texture. The final touch is the dried cherry tomatoes — marinated with soy, sugar and lemongrass—, the smoked sardine and a few cubes of Latin cheese.

This dish is one of the appetizers that the brothers have recovered in their gastronomic proposal for the summer. With this revamped menu, the restaurant’s sixth anniversary is also celebrated. Six years in which Sergio and Roberto Hernández have obtained important awards for Latasia, a project that blends traditional Mediterranean cuisine with Asian and Latin American cuisine. The brothers’ traveling past has marked their professional careers and inspires the cuisine of the three restaurants they manage in Madrid.

Avocado is one of the most versatile fruits in the kitchen. To its multiple nutritional benefits, it adds a delicious texture and flavor that allow cooks to unleash their creativity with surprising recipes. In Taramara (Avenida de los Arces, 11. Madrid), Sergio and Roberto Hernández offer grilled avocado with partridge marinade, a dish in which the fire gives the fruit an exquisite smoky flavor. The highlight is pickled partridge, a culinary technique of Spanish origin that not only serves to preserve food, but gives it freshness, making it perfect for summer.

Another interesting proposal to combat the heat that you find on the Taramara menu is Gazpacho with smoked sardines and ricotta. It is prepared following the traditional recipe of this popular Andalusian cold soup, but with a more delicate flavor thanks to the ricotta.

Taramara is the second project of the Hernández brothers in Madrid. With a more traditional cut, the menu recovers the classic recipes that Sergio and Roberto learned in the kitchens of their mother and grandmother, two of their great references. A restaurant in which their roots are honored, but without forgetting the itinerant cuisine that characterizes them. 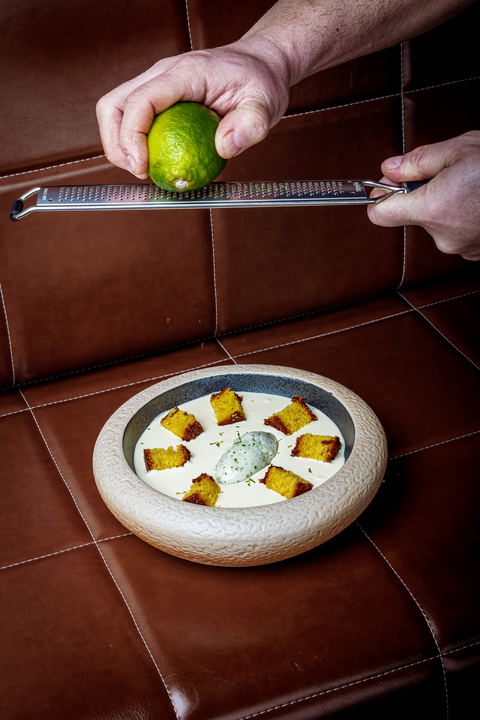 Since desserts are also for the summer — and there are options besides ice cream—, Moemia (Avenida de los Andes, 8. Madrid) includes a refreshing citrus soup on its menu that will delight the sweet tooth.

It is prepared with a base of English cream with lime juice on which we place a sponge cake with thyme. The dish ends with a basil sorbet quenelle and a touch of grated lime, which adds freshness to the finish.

The menu of Sergio and Roberto Hernández’s more casual restaurant is faithful to the brothers’ identity: international cuisine with dishes that recall childhood moments in the most traditional Madrid that saw them born. In Moemia’s offer, proposals rooted in Madrid’s gastronomic culture coexist with dishes inspired by his travels around the world.

If there is one dish that increases its presence on restaurant menus in the summer, it is salad. Despite being one of the usual accompaniments throughout the year, when the heat arrives it takes on an increasingly important role as a single dish.

Salads are fresh, delicious, very versatile and easy to prepare, but for those who want to learn new recipes, Scoolinary has created the Healthy Salads course.

In this course, students learn how to prepare surprising proposals from the hand of chef Juliana López May. Consisting of 12 lessons, in

You can find traditional proposals – such as Panzanella -, innovative ones – such as couscous salad with raw cauliflower -, salads with legumes, with fruit, with vegetables … Furthermore, it shows how a simple vinaigrette has the power to transform this dish and elevate it to another level or the interesting nuances of crunchy flavors and textures offered by items such as croutons, caramels and breadcrumbs.

Healthy Salads is one of more than 190 courses available on the Scoolinary website, the leading online school in the sector that counts among its teachers more than one hundred of the best chefs in the world.