Ramen is a delicious Japanese noodle dish that has become popular all over the world. While there are many different ways to enjoy ramen, there are also some interesting facts about this dish that you may not know.

For example, did you know that ramen was originally a Chinese dish? It wasn’t until the 1950s that ramen became very popular in Japan. Chinese workers who built the first railway lines in Japan are believed to have introduced the dish to the country in the late 19th century. From there, it quickly became a favorite of Japanese workers and soldiers, who loved it Simple but satisfying ingredients. In 1958, Momofuku Ando invented instant ramen which increased its popularity, there is even a ramen museum in Japan.

It was originally called Shina-soba or Chuka-soba. Today, ramen is enjoyed by people of all ages and backgrounds, making it that way in one of the most emblematic dishes of Japanese cuisine (with the permission of sushi). Ramen is a very popular food in Asia and is becoming more and more popular in the West. In recent years, ramen restaurants have started to open in many cities and packaged noodles are now widely available in supermarkets, a convenient and affordable food, yet high in sodium and calories.

What is ramen and what it means

It consists of a bowl of wheat pasta in a broth which usually includes ingredients such as meat, vegetables and eggs.

Any good cook will tell you that the key to making a great dish is in the ingredients. The same goes for ramen. While there are many different ways to make this Japanese noodle dish, there are some essential components that every bowl should include. 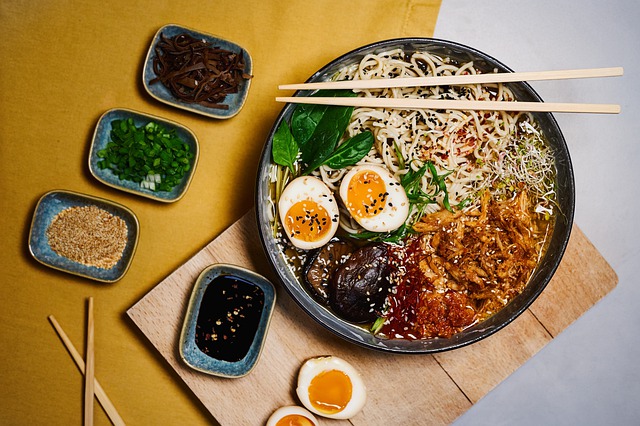 The first of course it is the pasta itself. Ramen is the union of the Chinese words “ra”, which means “to stretch”, and “men”, which translates as “spaghetti”. Ramen are usually made with wheat flour, salt, water and kansui (a type of water used for cooking), which gives them their characteristic springy texture.

Secondly, the ramen needs a tasty broth. What makes a good ramen is the broth, and it shouldn’t be sacrificed for any other ingredient, it is what defines and flavors the rest of the ingredients. This can be done with chicken, beef, pork, or vegetable broth. The best way to get this flavor?

These are some of the most popular soups that are characterized by the type of “tara” (basic flavor):

What goes with the ramen? Fittings

Third, ramen is traditionally flavored with a protein, such as chicken, pork or eggs. Finally, they usually add fresh vegetables like carrots, onions and spring onions for flavor and texture, bamboo shoots, nori (seaweed) and fish cake. With these ingredients you can create a delicious and satisfying bowl of ramen.