The porrusalda, or purrusalda, is one of the great soups or stews of Basque cuisine. Its origins couldn’t be more humble because what it refers to is a Leek and potato soup which, from there, has many versions and interpretations. It is the typical dish that every mother in Spain would prepare on flu and cold days because she soothes the soul; although it is also seen in the summers of the Cantabrian coast, which are usually not summers at all.

From that leek and that potato, in the traditional classic stew that is what accompanies us today, the options can be endless. There are those who use pumpkin instead of carrot, those who add cod at the end of the soup to turn it into a full-fledged single dish, those who incorporate rice and those who even dare with pork by adding a rib at the end or a little ‘of bacon.

But in its humblest origin, 100% vegetable, this is where the richness of this soup deepens, which will acquire consistency when the potato cooks and disintegrates slightly in the broth. Of course, fried onion is essential because it gives it different shades, as well as adding aromatic herbs and also having a good vegetable broth to start with.

For this recipe, the chickpea stew together with the green part of some spring onions and leeks, he managed to acquire a wonderful flavor in the final result. Details matter! When chickpeas are cooked for any recipe – such as a toast with hummus, cheese and spiced chickpeas, a cream of chickpeas with Brussels sprouts, a chickpea stew with cauliflower and eggs or a salad of chickpeas, carrots and seaweed – the broth that results are always treasure and should be kept as a golden cloth for other preparations such as creams, rice dishes or even to stew meat.

Since it contains potatoes, the optimal time to consume porrusalda is at the end of its preparation (which is a very easy recipe) because most potato varieties will stiffen in the cold if they are left overnight in the refrigerator. However, if there are any leftovers, you can always blend them to obtain a delicious vegetable cream with the underlying flavor of Basque porrusalda.

How to make the porrusalda 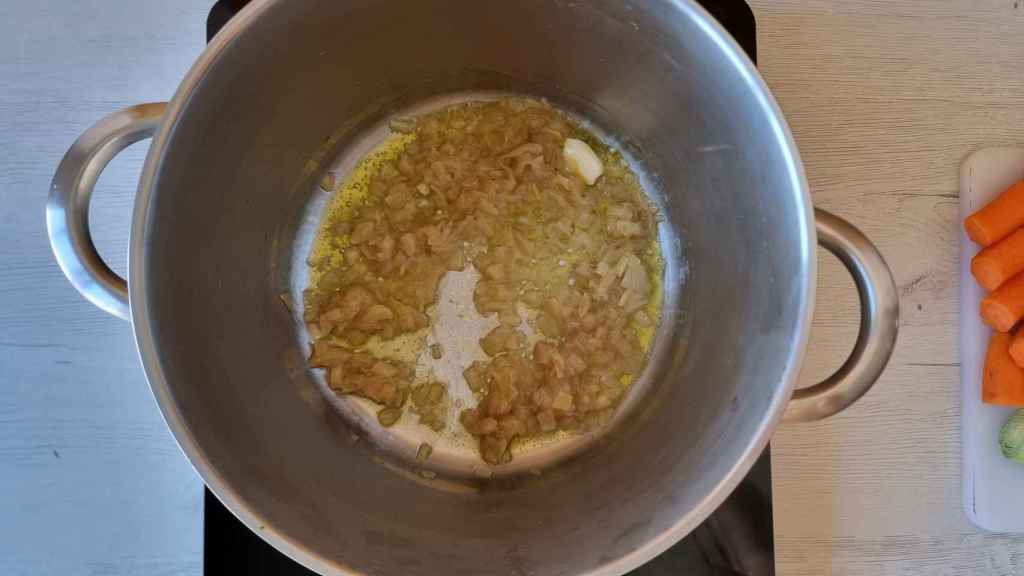 Peel the onion and chop finely. Put the onion, oil and a pinch of salt in a saucepan where you are going to prepare the soup and begin to fry over low heat until it reaches a slightly golden color. 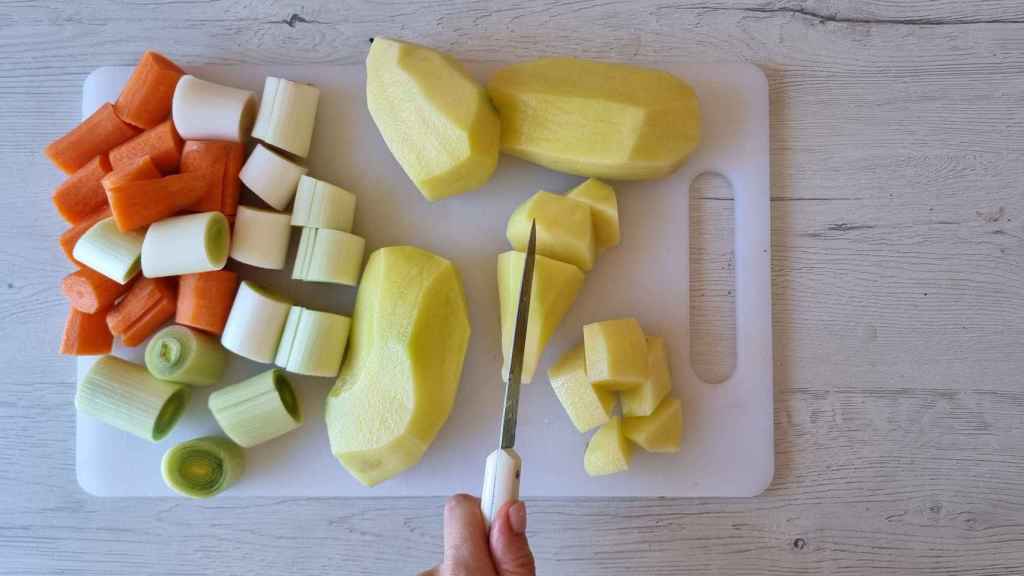 Meanwhile, peel the carrots and chop them into portions of about two centimeters. Do the same with the white part of the leeks, always removing the outermost layer and cleaning well under running cold water in case there are traces of soil. Peel the potatoes and cut them into portions a little larger than the bite size. 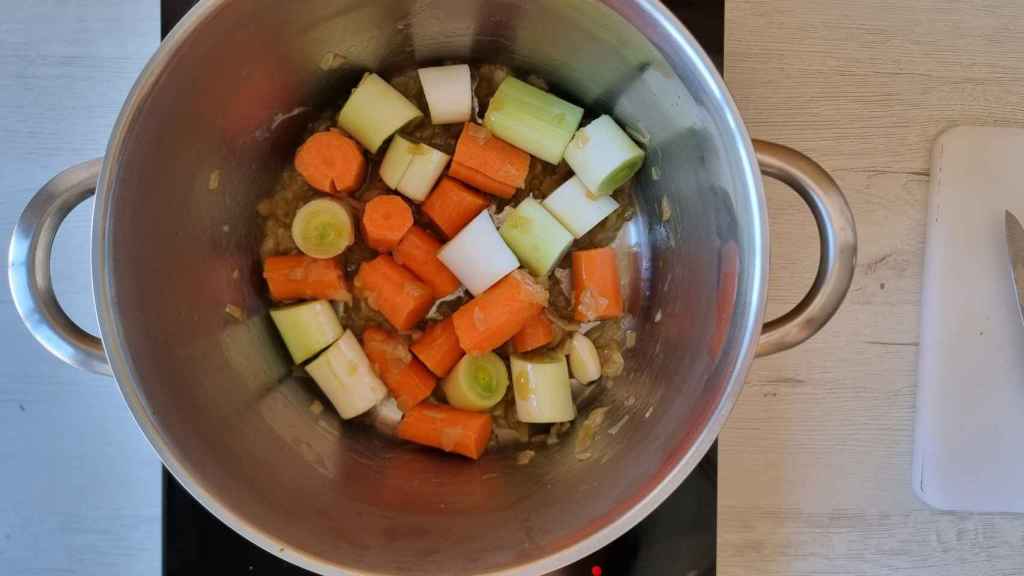 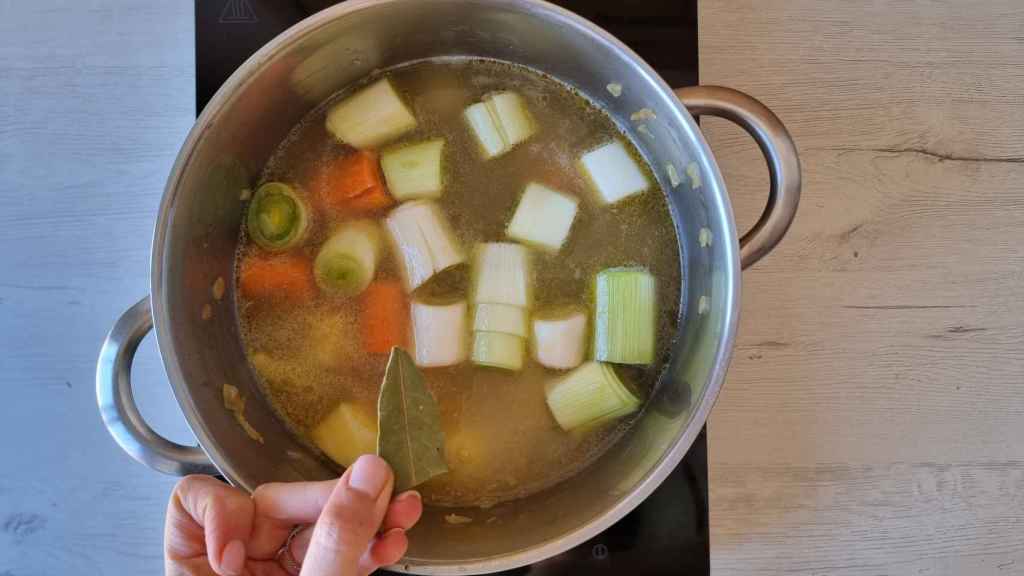 Add the broth so that it covers everything, exceeding it by about three centimeters above and bring to a boil. When it starts to boil, reduce the heat to low and add the peppers, bay leaf and thyme.

Cook for about 15 minutes or until the carrot and potato are very tender. At that moment, give the pot a few strokes back and forth so that the potatoes melt slightly, but without manually intervening.

Season with salt at the last minute and serve with a few drops of raw extra virgin olive oil on top. There are those who will mash the potato with a fork and eat it all later, you must love them too.