We share territory, history and many customs. Spain and Portugal are sister countries, but Portuguese gastronomy can still hold us many surprises

For many, the cuisine of Portugal is cod cuisine. It is true that the Portuguese cookbook is full of dishes based on this salty fish, but there are many other formulas, much less known, that are worth discovering. From strong northern stews, to delicate egg-based desserts. Let’s review some of the snacks not to be missed. 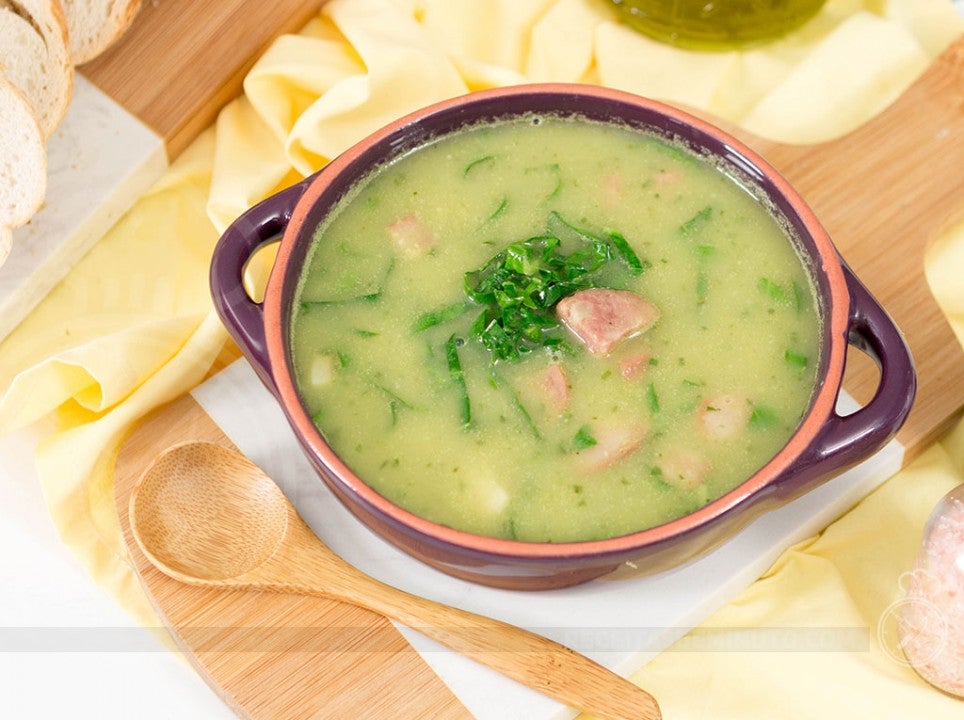 Arguably, with the permission of cod, the green heat is the Portuguese national dish. Although it originates from the Minho region in the north, it is consumed throughout the country, especially in the feasts of popular saints and at the dawn of New Year’s Day. In reality it is not a broth, but a kind of thick soup, or clear puree, made from potatoes and couve-galega (cabbage), which gives it its characteristic color. It is usually served with a few slices of chorizo ​​(chouriço). 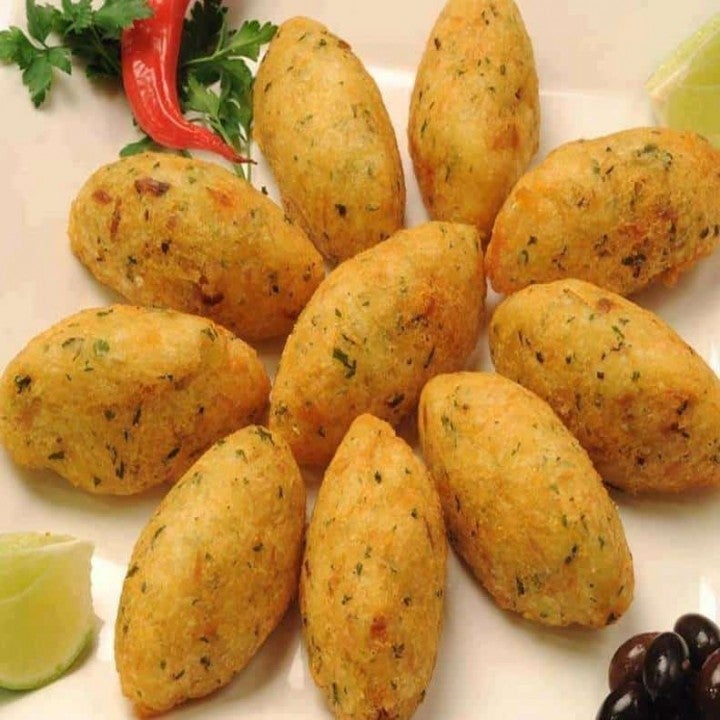 Although cod is also the protagonist in this recipe, it deserves a separate chapter, since it is not a single dish, but rather an appetizer or “petisco”. The desalted cod is mixed with cooked potatoes, eggs, onion and parsley, to form a kind of meatballs which are fried in olive oil. By saving distances, they could represent for the Portuguese what ham croquettes are for our gastronomy. 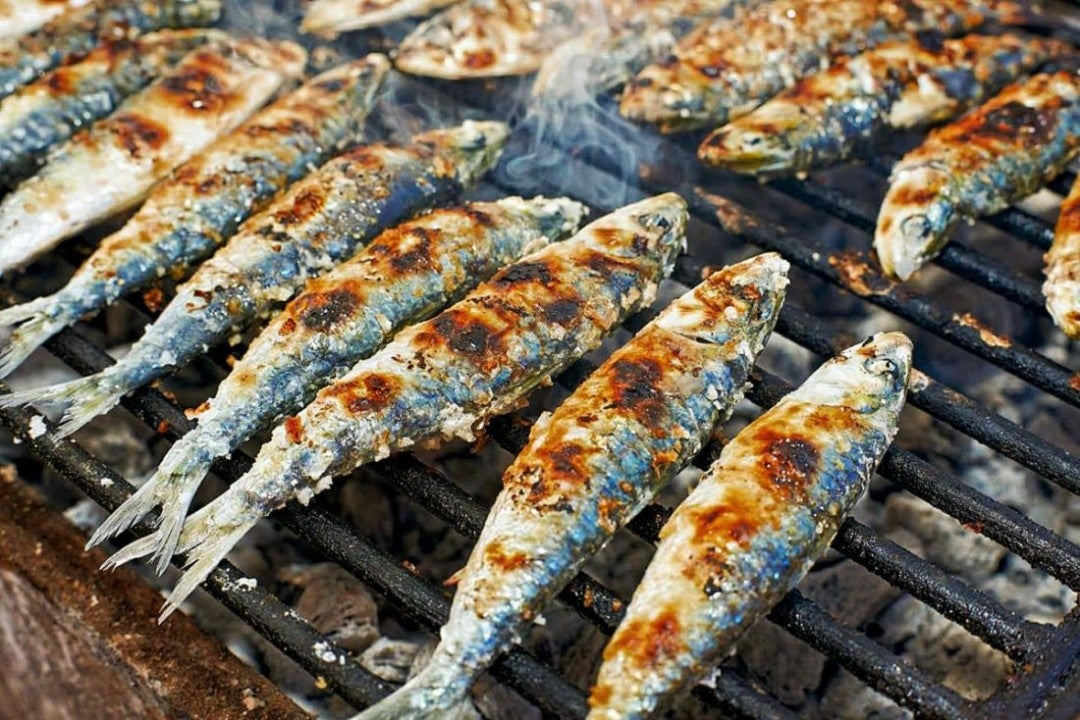 It is another of the fish that the Portuguese consume the most. The most traditional way to eat sardines is simply grilled, but there are also many recipes to prepare this fish, which reaches its best moment between the end of spring and the beginning of summer. In many restaurants, for example, they usually put a can of sardine pate as an appetizer and, at home, they are usually baked or cooked in different stews. 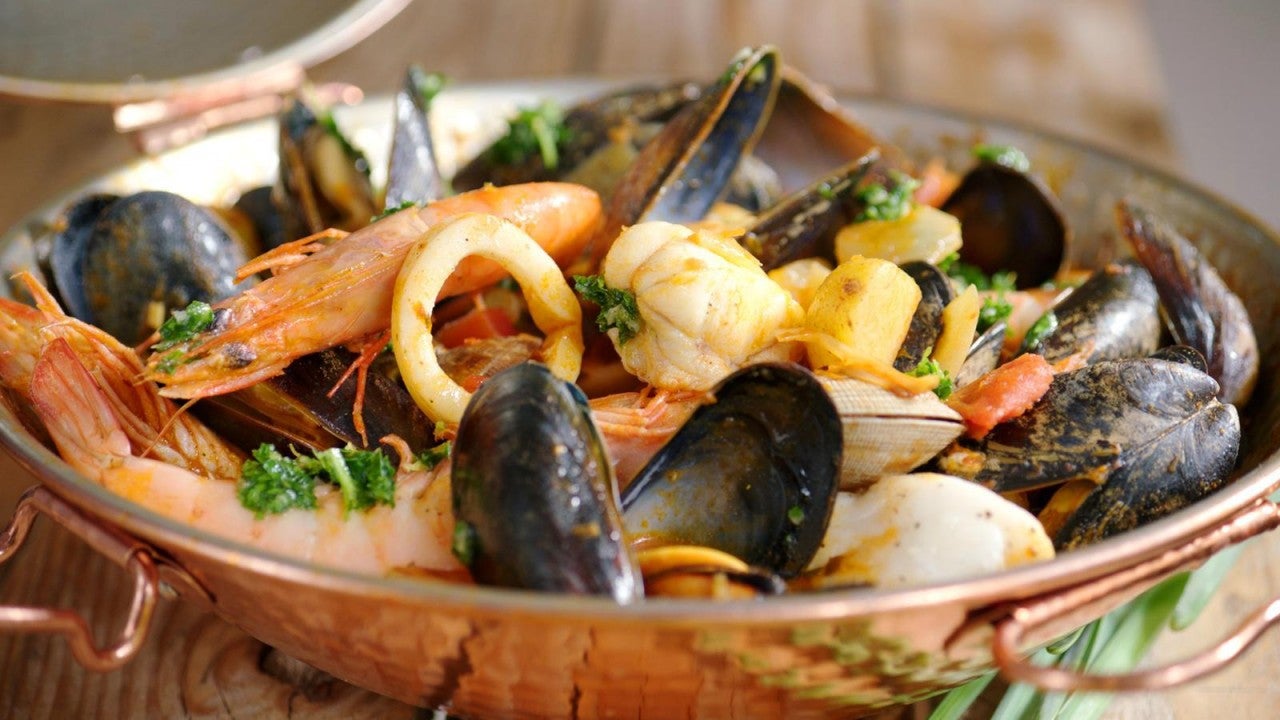 Although it appears on the menus of many restaurants, it is not really a dish, but the container in which it is made (with the Portuguese cataplana something similar happens to what happens with our paella, because the dish takes its name from the container). It is a kind of double pan with a hinge that closes on itself to form a sort of covered pot. It comes from the Algarve area in the south of the country, and although they were originally made of copper, stainless steel or aluminum are now more common. The possibilities of use are unlimited, but most of the time the cataplana is used to cook fish and shellfish dishes.

Continuing with the similarities to the dishes we are most familiar with in Spain, the “açorda” would be something like a very thick Castilian soup, in which, yes, no sausages or paprika are used. The ingredients of this recipe, typical of Alentejo (which is why it is also known as “Alentejo soup”), are stale bread and eggs, as well as garlic, oil and coriander, a fresh herb that the Portuguese love very much. . It is obviously a subsistence dish, made with cheap ingredients, even if today, especially in coastal areas, fish or shellfish are often added. It can be eaten both as a single dish and as an accompaniment to other products, especially fish-based. 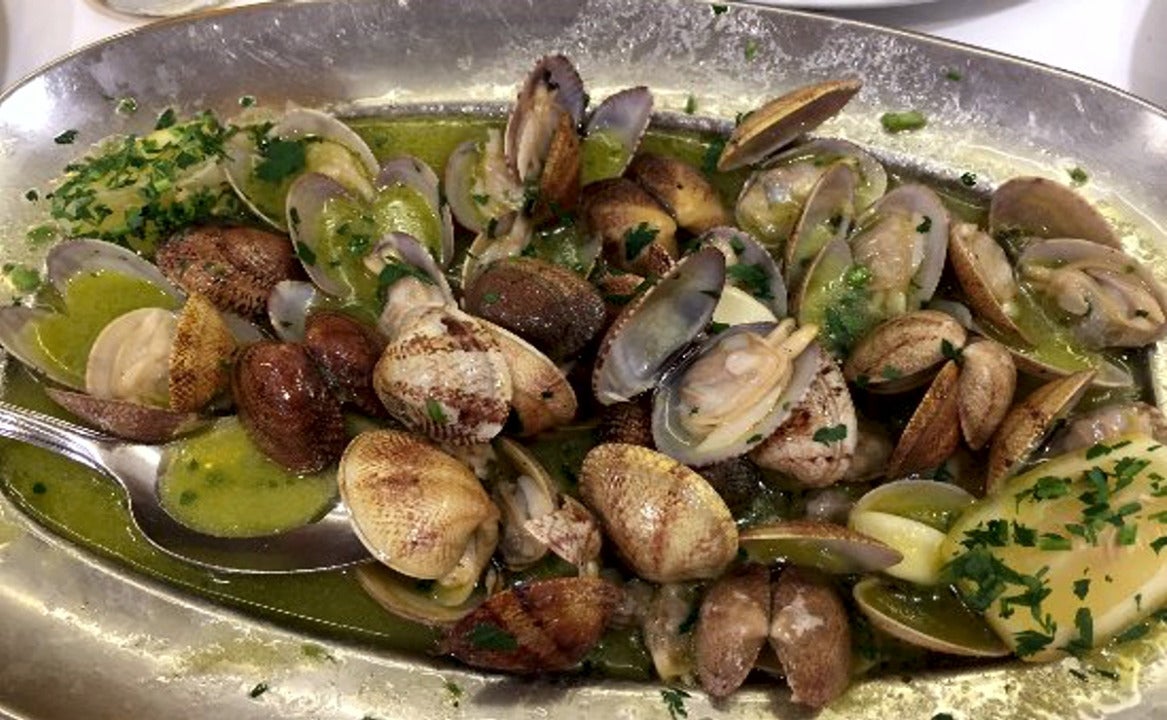 They are basically clams with garlic, in which parsley is replaced by coriander. This dish is typical of the Lisbon region, but is offered in restaurants across the country. It owes its name to the writer Raimundo António de Bulhão Pato (1829-1912) who, curiously, was born in Bilbao and it is essential to equip yourself with good bread, because, for many, the best thing is the sauce that remains on the plate after having eaten clams 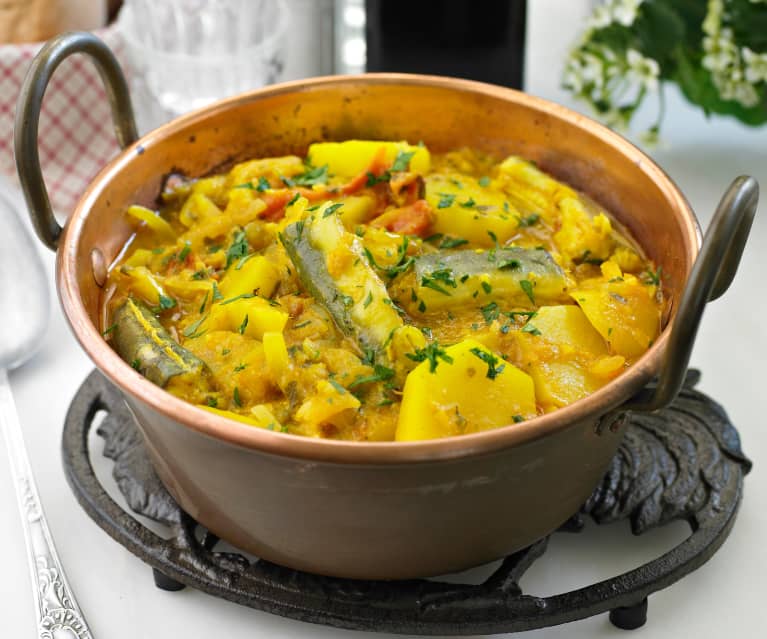 This dish originates from the area of ​​the Ría de Aveiro (between Porto and Coimbra), as in the past a large number of eels were fished there. Now, most are nurseries, but the tradition of this recipe is still very much alive. The basic ingredients, in addition to eel, are: potatoes, onion, garlic and parsley, oil, bay leaf, white wine, vinegar and turmeric, which gives it its typical yellow color. 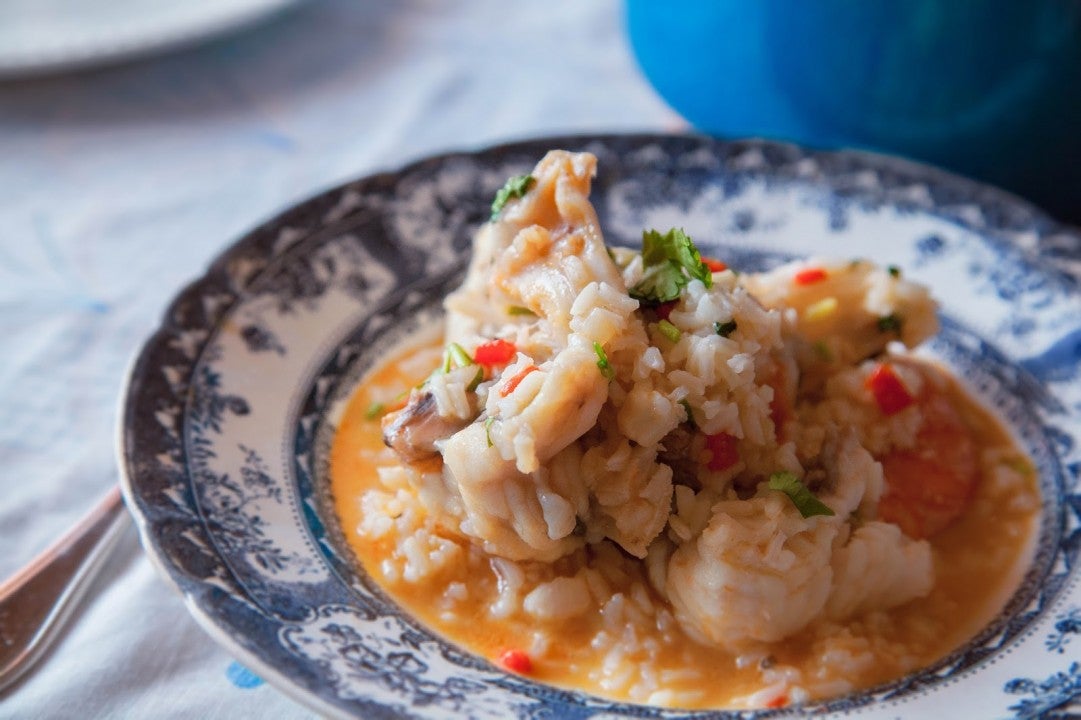 Rice is a very popular food in Portugal (it was the Portuguese who introduced this product in Europe), and one of the most popular in Portugal is monkfish, a fish once considered “third class”. There is no precise recipe, since in every house and in every restaurant it is prepared in a certain way, but what almost all of them have in common is that they are rice soups and that, in addition to monkfish, they incorporate some fruits of sea ​​like shrimp, clams or clams. 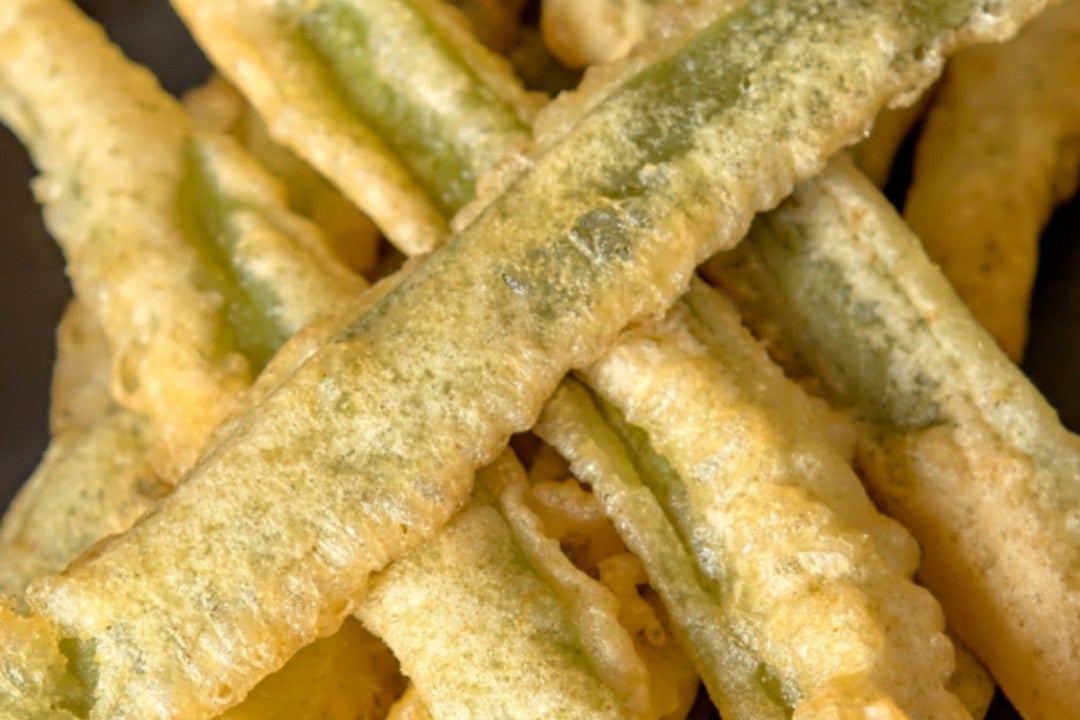 This is what the Portuguese call battered vegetables. It is one of most common appetizers served in Portugal and, although it was originally made mainly with green beans, it is now common to find it with more types of vegetables (carrots, squash, peppers …). The dish recalls the famous Japanese tempura, but it must be remembered that it was the Portuguese and Spanish missionaries who brought the technique of frying to the land of the rising sun (it is said that the name “tempura” derives from the insistence of the religious that the “temperature” oil was high enough before putting food), and not vice versa. 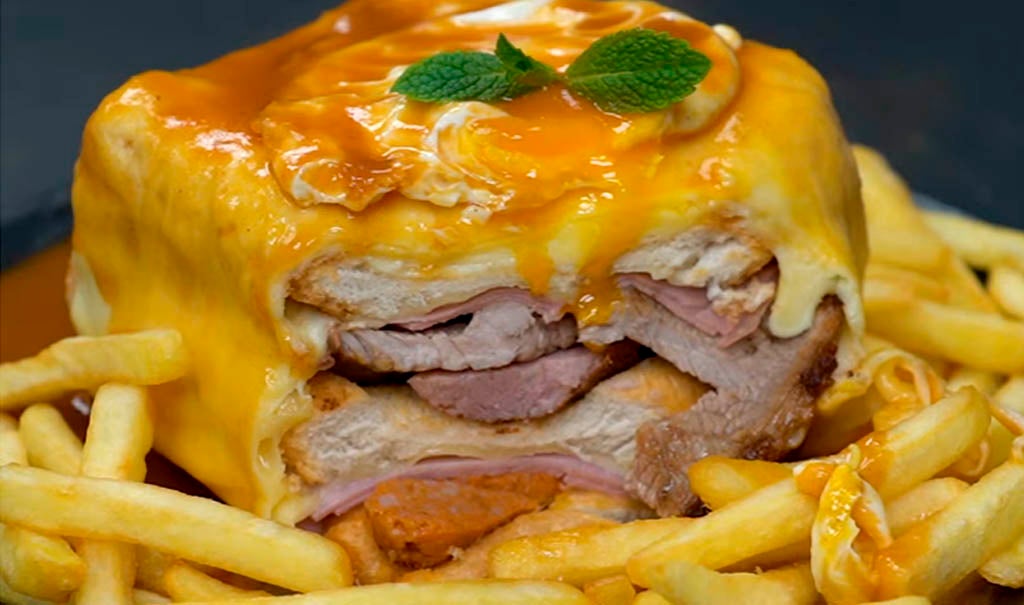 It’s Portugal’s most famous sandwich… and a real calorie bomb. It was created in the 1950s by a chef named Daniel David da Silva, who had met the “croque monsieur” while working in France. Back in his country and opening his restaurant “A Regaleira”, in the city of Porto, he started serving this sandwich, which contains nothing more and nothing less than: beef, cooked ham and “linguiça” (a kind of sausage) . As if that weren’t enough, it’s au gratin with a large amount of cheese, and is topped with a beer-and-meat sauce, a fried egg, and a mountain of French fries. Today it is offered in most of Porto’s bars and restaurants, competing with the “bifana”, a marinated pork sandwich. 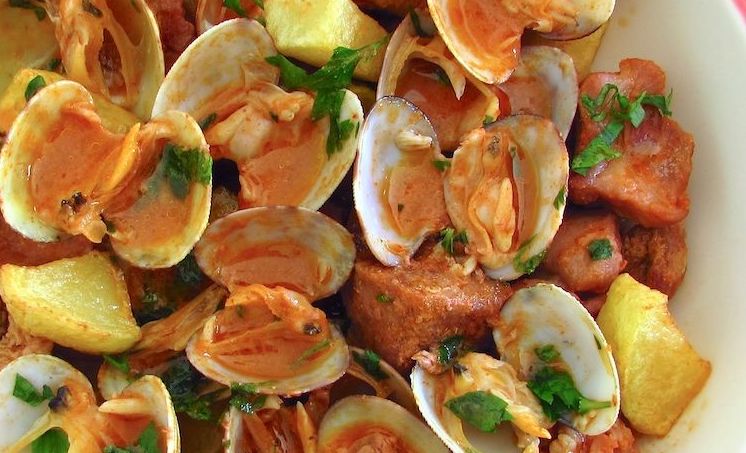 Although fish and shellfish are an important pillar of Portuguese gastronomy, pork is also the basis of a good number of typical dishes of the countryside (codido, feijoada …). One of the most curious is this, since it combines pork with clams. As the name suggests, it is originally from Alentejo (south-central Portugal), which in Portuguese literally means “beyond the Tagus”. In addition to the two ingredients mentioned, the recipe includes garlic, paprika, white wine, coriander, bay leaf and, often, olives. It is always served with potatoes, usually fried. 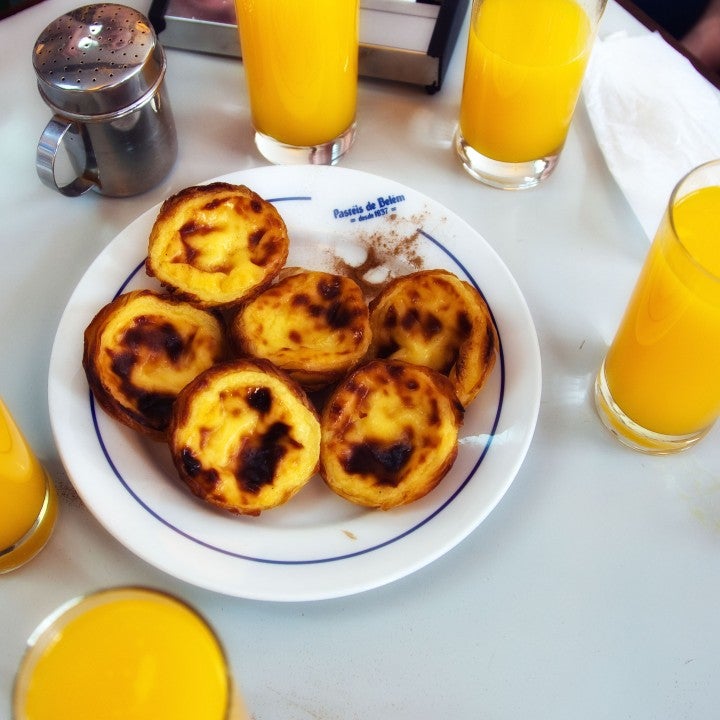 They are the most typical sweets of Lisbon. They were created in 1837 by the monks of the Jerónimos Monastery, and the exact recipe, which remains secret, is the one that continues to be made in the “Fábrica dos Pastéis de Belem”, in the Portuguese capital. However, these cream-filled puff pastry tarts, or very similar ones, can be found around the city, although for obvious reasons they are advertised as “pastéis da nata” (cream cakes). Those with a sweet tooth who go to the neighboring village should not miss out on trying other specialties, such as the “tortas de Azeitão”, pastries with eggs, lemon and cinnamon, typical of Setúbal; the “ovos moles de Aveiro” (a kind of Santa Teresa yolks wrapped in a wafer of different shapes), the “pão de ló” (a spongy sponge cake), or the “arroz doce”, very similar to our pudding of rice.